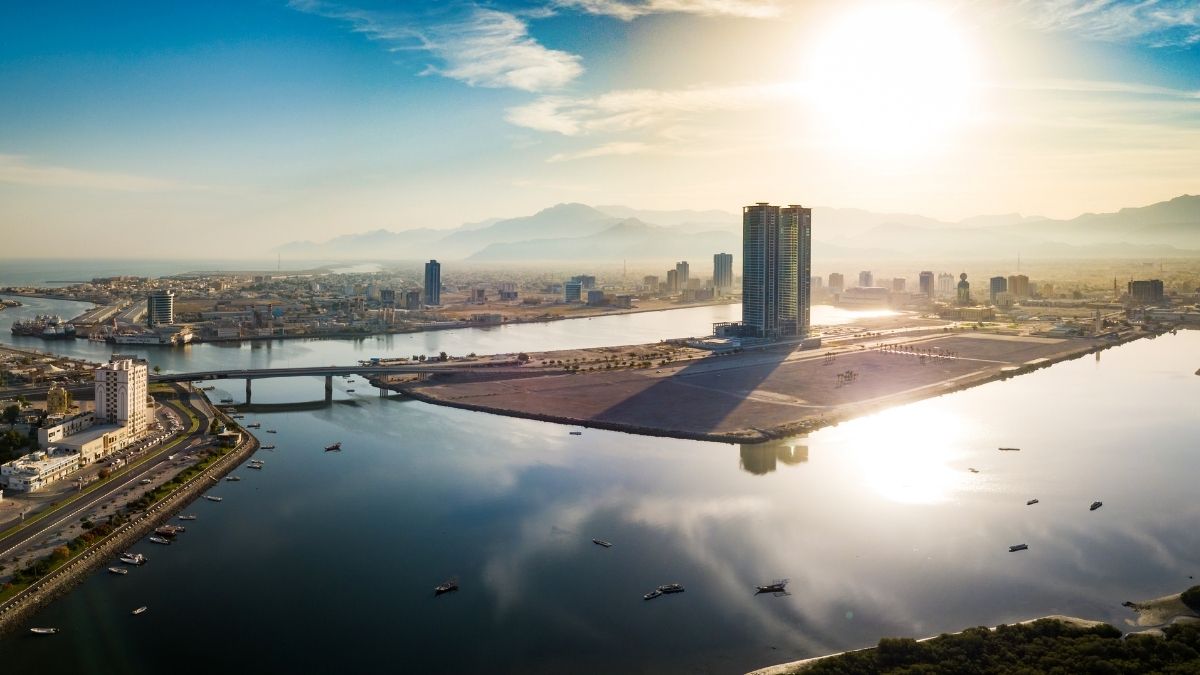 If the thought of visiting the UAE has always intrigued you, but you’d like to know the true UAE not the glamourous playgrounds of the rich and famous we see plastered across the internet today. RAK is perfect

Ras Al Khaimah is 45 minutes away by car from Dubai. If you are visiting Dubai for vacation, you should definitely make time to visit Ras Al Khaimah because it is so close. RAK is an excellent weekend getaway destination with a plethora of exciting activities for adventurers. It has something for everyone, whether you like the mountains, the beach, or hiking.

If driving to Ras Al Khaimah is not an option, read our article on How to Travel Between RAK and Dubai If You Don’t Have a Car.

Ras al Khaimah (or RAK), one of the seven regions that comprise the United Arab Emirates, is an extremely diverse location. If the idea of visiting the UAE has always piqued your interest, but you want to know the real UAE, not the glamorous playgrounds of the rich and famous that are plastered across the internet today. RAK is ideal.

It’s ideal because, years ago, when the oil money began to flow into the country, the ruling tribe of RAK decided they didn’t want any of the foreign riches. This meant that large swaths of the region escaped the allure of commercialism and burdensome over-tourism.

Jebel Jais in Ras Al Khaimah is the highest peak in the UAE, standing at 1,934 metres above sea level. The mountain provides breathtaking views of the sunrise and sunset. The 35-kilometre-long road to the top of the hill includes eight hairpin turns and numerous sharp corners, making it one of the best routes in the world. It also has the world’s longest zipline, which draws adventurers from all over the world.

The mountain is part of the Hajar ranges, and the road that leads up to or through it is known as the Jebel Jais mountain road. View the rugged cliffs, deep canyons, and twisted escarpments that lead to the summit. The road has three lanes, two of which go up, and the temperature at the top is 10 to 13 degrees lower than at sea level.

Things to do at Jebel Jais

How to reach Jebel Jais

The mountain range of Ras Al-Khaimah is around 60 km away from Ras Al Khaimah City Center, making driving a viable option for travellers and locals alike. For those who are up for a long road trip and enjoy looking at landscape views pass. Check out our previous article The best ways to get to Jebel Jais from Dubai

Jazirat al-Hamra is a small picturesque fishing village that depicts the region’s lifestyle prior to the discovery of oil. It is one of the most well preserved and oldest coastal villages in the UAE, with roots dating back to the 16th century. It has been abandoned and left to nature’s work.

The village’s residents made their living primarily through pearl diving and fishing. When they left in 1968, the dry desert weather conditions aided in the preservation of the area. The coral black houses built in a traditional style, as well as mosques, wind towers, shops, and schools, are the village’s main attractions.

Ras Al Khaimah’s National Museum is located in Ras Al Khaimah. In the western part of Ras Al Khaimah city, in a fort that was the residence of the ruling family until the early 1960s. The National Museum houses a collection of archaeological and ethnological artefacts. The Qawasim Room on the first-floor houses documents, manuscripts, and treaties between the rulers of Ras Al Khaimah and the UK Government, as well as some traditional weapons belonging to the ruling family. The showcases at the museum range from the earliest settlers to the late Islamic period. The highlight of the ethnographic display is traditional life in Ras al-Khaimah.

Shimal is a small hamlet with significant historical significance and a plethora of pre-Islamic tombs. Shimal is a small rustic village nestled near the Hajar Mountains, located north of Ras Al Khaimah. The site is rich in archaeological significance and is home to several hundred pre-Islamic tombs. The records and historical findings also provide evidence of settlement in the area between 2000 and 1300 BC. Several items, including pottery, bronze and copper weapons, stone vessels, and beads, were discovered during the excavations.

The greatest discovery in the area, however, is thought to be the discovery of a massive circular tomb from the Umm al-Nar period. Husn al-Shimal Fort, from the small Islamic era, can also be seen perched high above on the rocky outcrop. For those who appreciate history, this is a must-see location.

The Hajar Mountains add to the emirate of Ras Al Khaimah’s natural beauty by serving as a majestic backdrop.

The majestic Hajar Mountains are a significant part of the emirate, adding to its scenic beauty and serving as a major draw for both locals and tourists. The range slopes into the sea, with its highest point pointing north. The area is known as Ruus Al-Jibal, which translates as “Heads of the Mountains,” is surrounded by an endless cover of desert and rust-coloured sand dunes.

The Hajar Mountains have the most igneous rock exposed from the oceanic crust surface area, providing a magnificent view of the desert from its summit. The highest point of the mountains, Jabal Yibir (1537 m), is a popular geological hotspot.

Dhayah Fort, which was built in the early nineteenth century, is an ancient structure that serves as a defensive military tower. This mud and brick fort served as the site of the last battle between local tribes and British soldiers in 1819. On the south side of the hill, one can still see the nearly ruined fortification.

The building is located about 18 kilometres north of Ras Al Khaimah city on the Al Rams Road. To reach the top of the fortress, climb the steep zigzag staircase, which is well worth the panoramic view of the surroundings. The view of the Hajar Mountains, green date-palm oasis, and city area is spectacular.

Wadi Shawka is a popular hiking destination in Ras-al-Khaimah and is considered an exploration hike because it provides an all-in-one experience that includes off-road drives, pool dips, natural springs, greenery, and the mountains. The Shawka trail can be visited because of its difficult route and the picturesque beauty of the mountains as a backdrop. Wadi Shawka, located just 92 kilometres from Dubai, has proven to be one of the most popular hiking, camping, and picnic spots. The hike will undoubtedly be a unique experience that allows you to explore small villages, meet locals, walk along the transformative landscape, and enjoy a barbecue on the banks of Wadi Shawka.

Things to do at Wadi Shawka

How to reach Wadi Shawka?

There is no public transportation that will take you to Wadi Shawka. To get to the destination, one must use a private vehicle or a hired cab.

The water level at Khatt Springs is 90 feet underground, with temperatures reaching 40 degrees Celsius. Aside from relaxation, the water’s mineral content is said to have medical benefits for rheumatic diseases, skin problems, and muscle problems. Dermatitis and rheumatic ailments are also treated here.

The surrounding area, which contains approximately 170 archaeological sites, can also be visited. Because of its popularity and healing properties, this location is frequently crowded with both locals and tourists who come to enjoy the power of this hot spring.

The Saqr Park is Ras Al Khaimah’s largest public park, known for its lush greenery. It is the ideal place for adults and children to unwind and relax. Under the direction of El Sheikh Saqr bin Mohammed Al Qasimi, the Ras Al Khaimah Municipality began the implementation of the project Saqr Park in 1989, and the sun rose in the garden in 1991, becoming an important resort frequented by visitors from within and outside Ras Al Khaimah.

Within the park, there are three arcades with a variety of entertainment and sports games for children. There is also an artificial lake with waterfalls and boating activities within the park. The ‘Land of the Garden,’ which has many palm trees, is a unique feature of this park.

We always want to flee the city and escape to a quiet beach as restrictions relax and crowds flock on the roads. Away from the horde and the sweltering furnace weather. We want fewer cityscapes and more secluded coves, hidden bays, and golden sands.

If you want to escape the city smog and experience the sea breeze, Ras Al Khaimah has 50 beaches (public, private, and hidden).

Adventurers will not be disappointed during their visit to Ras Al Khaimah. The UAE’s largest covered play area, complete with an indoor adventure park, is now available in the aspiring adventure capital.

Indoor drop tower is an amusement ride in Ras Al Khaimah where an aerial lift carrying riders is lifted to the top of a large vertical structure (in this case 40m High), then released to free-fall down the tower. Brakes engage to slow the ride or a series of bounces before coming to a stop.

Tridom is a world of fun and thrills, a full-fledged family experience that will ensure laughter and excitement. This is in addition to the portfolio of the Landmark Group, which includes Fun City and Fun Ville.

Camel races are a traditional Ras Al Khaimah heritage activity. Camel races, primarily a winter pastime, are held on weekends at the Digdaga and Hamraniya camel racetrack, which is surrounded by dunes and sheltered by thickets of Ghaf trees.

Al Sawan Camel Track is a 10-kilometre racetrack where locals and tourists alike come to witness the ancient tradition of camel racing. Camel racing, like horse racing, is an age-old tradition. Locals enjoy betting on which camel will win, and tourists appreciate the sport’s cultural and historical significance.