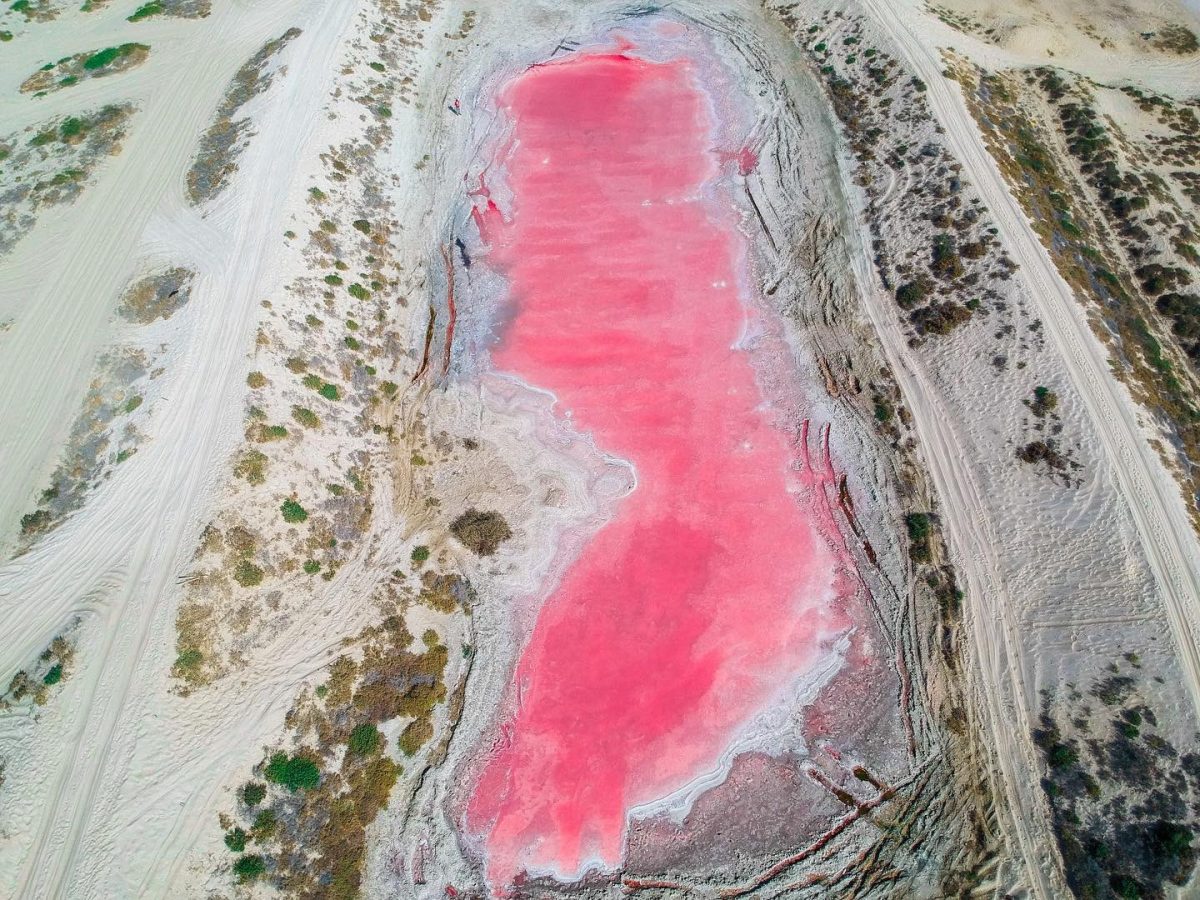 There is a stunning pink lake in Ras Al Khaimah

A nature lover has turned heads after he discovered a pink lake near the Ras Al Khaimah coastline.

The pictures were taken with a drone around 100 metres away from the coast at Saraya Islands, located in the Al Rams area of Ras Al Khaimah. The lake, Al Farsi described, was approximately 10m wide and 40m in length.

In an article published by the website howstuffworks.com, it explained that Halobacteria and the algae Dunaliella salina cause lakes to turn pink in colour, as they both which thrive in salty environments. The carotenoid red pigments secreted by Halobacteria and d. salina are responsible for the pink lakes’ colours. These same algae also flourish in the Dead Sea.

The water discoloration and its transformation to pink is due to the proliferation of red algae, which include more than 4,000 species.

Ultimately, taking photos of the opaque pink lakes is the best way to enjoy them. Below is some insight into why are pink lakes pink in the first place

What made the water pink?

Over the years, there’s been many studies conducted to determine the exact source behind the lakes and their whimsical colour. The colour is said to derive from the salt content found in the lake as well as from algae that is known to thrive within the salty environment.

While the algae, especially the species, Dunaliella AlgaeOpens in a new tab., are pink in colour and can be found in these lakes, they aren’t considered the primary source of the lakes hue. Studies have shown that a bacterium called salinibacter ruberOpens in a new tab. is also a huge contributor to what stains the water.

These algae and bacterium are known for their reddish-pink hues which essentially means that they produce what is called “carotenoid” a beta-carotene that is a colouring agent.

The high salt content of the pink lakes aids in extracting the colours from these creatures. Additionally, depending on what lake it is and what specific species are found in the water, the lakes’ water can appear lighter pink, darker pink, and even shades of purple.

The samples were analyzed and it was found that the salinity of the water measures 208, while seawater levels usually sit between 38 and 39. Due to high salinity, the algae is growing in it and feeding off the nutrients. The analysts are still uncertain as to the exact species of algae because there are more than 4,000 in existence.

In this latest discovery, the salt-heavy waterbed formed as a result of evaporation, which is often recorded in areas of low and high tides, called sabkhas.

A term typically used by Earth scientists, a sabkha is a coastal sandflat in which saline minerals accumulate as the result of the arid climate.

Pink Lake of RAK is located on the Saraya Island in the Al Rams area of Ras Al Khaimah. The lake is burrowed in a natural cavity approximately 100 metres inland from the coast. If  you are planning to get to the UAE Pink Lake location, you can first reach Saraya Island, RAK. Use the location plus code: V2P7+HR Ras Al-Khaimah, Ras al Khaimah – United Arab Emirates for accurate directions to the island. Reaching Saraya Island from Dubai International Airport could take approximately 1 hour and 20 minutes. The journey from Ghantoot, Abu Dhabi can take close to 2 hours. All those travelling from Sharjah SAIF Zone can reach Saraya Island in an hour via E311.

Is RAK Pink lake the only pink lake in the world?

No. Pink lakes are very rare natural wonders. There are only a few known pink lakes in the world. They all are salty and mesmerizing. One interesting factor all pink lakes have in common: they’re salt lakes. According to scientific researches, the unique colouring can be explained by the high salinity of these lakes.

How many pink lakes around the world?

Pink Lakes are quite fascinating to see. Not because they appear mysteriously poisonous or appear to be like a boiling water. To some of us it may appear like a lake on some alien planet. A recent study revealed that there are 49 pink lakes discovered till now around the world. Pink lake of Ras Al Khaimah is one of the most recent ones.

Some lakes in Australia turn pink seasonally. Around UAE, there are 2 pink lakes in Oman, 1 in Saudi Arabia and one even in India. Here is an infographic by wow-rak listing all the 49 lakes around the world. Can you find the name of your country?

List of all the 49 Pink lakes in the world

Top 10 pink lakes around the world (with pictures)

The candy, bubblegum pink colour makes lakes look surreal. And they aren’t an optical illusion. They’re natural WONDERS that can be found in many countries around the world.

Because of pink colour, these lakes are becoming increasingly popular among tourists and photographers from around the world. If you decide to visit one of these lakes, keep in mind the rules of responsible travel. These natural wonders should not be damaged by irresponsible tourists.

Below you will find the 10 best pink lakes in the world – where you can have a truly unique experience.

Hillier lake lies at the heart of an island known as Middle Island in Western Australia. The lake is famous for its flamboyant colour, rose pink. A rime of white salt and a dense woodland of Paperbark and Eucalypt trees surround the lake. While the sand dunes separate it from the Southern Ocean to the north. A microbial species of algae is the water’s exclusive inhabitant.

Hutt Lagoon is a salt lake located near the coast in Western Australia. A huge percentage of the surface is made up of dry salt due to the high levels of evaporation. The salty water comes from the proximity of the Indian Ocean.

The pink hue is as a result of the algae in the water. Hutt Lagoon’s colour can vary from lilac to bright pink and can even turn silver depending on the weather.  The cloud cover and the time of the day affect the colour of the lake directly.

The waters of the lake Retba contain 50% more salt than does the Dead Sea! Locals need to cover their bodies in shea butter (to protect their skin from prolonged exposure) before they can go in the lake to harvest salt. It’s a pretty hard job as they scoop salt dredged from the lake’s bottom onto handmade boats.

The lake is located in a rural peaceful area. Yet it’s only a 40-minute drive from downtown Dakar. That makes it easy to visit on a day trip, though it’s worth spending the night to experience the lake at different times of the day. The water is most pink around noon, more of a red-ish in the late afternoon and almost normal looking at the sunrise/sunset.

Visitors have an easy time floating on the waters. Although no one should get too much exposure without skin protection.

This lake is located in the East African region of Arusha in Tanzania. The high evaporation levels around the lake have left behind a salty substance known as natron (a compound made mainly of sodium carbonate, with a bit of baking soda). Few animal species are able to survive in such a habitat, such as a few invertebrates, microorganisms, and a few fish species.

The lake gets its blood-red colour from the bacteria that live in it. The salt lake is steaming hot, with temperatures that can reach up to 60 degrees Celcius. If an animal or a bird immerse in the water, it will die and its body will be calcified. We would not recommend playing with the water in this lake.

Sasyk-Sivash lagoon is situated in the Crimean Peninsula between the Black Sea and the Sea of Azov. This pink lake is highly saline. Salt mining is rampant even though the water has a horrible odour which has earned the lagoons the nickname “Rotten Sea.”

The waters of the lake are very shallow (about 0.2 to 0.4 inches). But the lagoon still remains an essential part of the Crimean Peninsula’s economy. The salt from the lake is extracted and traded internationally.

Situated in the Central Anatolia area, this lake is hypersaline and among the biggest salt lakes in the world. In 2001, it was classified as a protected area. Flamingoes and geese are the most dominant species living in the surrounding area.

For most of the year, the Tus Golu lake is very shallow (between 0,5-1 meters), especially during dry summer months. During that time the water evaporates in huge quantities leaving a thick crust of salt on the surface up to 30 centimetres. The salt is extracted and sold in the local market.

Despite low salt content, this lake is among the most stunning pink lakes in the world. In the 13th century, a canal was built connecting the lake to the ocean to collect the ocean’s salt—and it certainly worked. In fact, there’s so much salt in Las Salinas de Torrevieja that there are mountains of it occupying its shore.

Salina de Torrevieja lake looks pink because of the algae and salt quantity. Just like the Dead Sea in Israel, you can float on this lake too. Also, it is very healthy for skin and lung diseases. During the breeding season, thousands of flamingos and other aquatic birds come to nest. Torrevieja is also home to several fish species.

It takes only about a two-hour drive to get to the Lake Bumbunga. It’s near the famous wine region of Clare Valley. The lake is actually really shallow so nowadays it’s a popular spot for Instagrammers and photographers.

Lake MacDonnell is an incredibly beautiful and popular place in Australia. It takes a good nine-hour drive west of Adelaide to get there. Nevertheless, it’s becoming a popular Instagram spot. What makes this place so popular is a straight mud road that separates pink waters of Lake MacDonnell from its neighbouring blue-green lake.

Previously a salt mine, now Lake MacDonnell is the largest gypsum mine in the southern hemisphere. Algae loving the lake’s high salt levels give it the startling pink colours.

Surrounded by an incredible backdrop of the rolling Andes Mountain range and rocky shorelines, Laguna Colorada is a sight to behold. Practically skimming the Chilean border, this 23-square-mile beautiful pink lake has a maximum depth of nearly five feet. Its shallow waters make for the perfect hangout spot for Chilean, Andean, and the endangered James’ flamingos.

Travelers can easily access the lake and stay for a night in one of the small villages surrounding the lake.

The short answer to this is no. The lakes do not pose a danger to the public. The algae and bacterium aren’t a danger and previous myths about the strange colour have more or less been debunked. Initially, due to the extreme colour of the water, theories swarmed around saying that it was pollution of some sort.

There’s a concern surrounding swimming in the pink lakes where it is thought that people’s skin might become stained pink. In theory, this could happen but more than likely it wouldn’t. Swimming in waters with high salt content for prolonged periods of time could cause mild skin irritation.

This is an unpleasant side-effect to staying in overly salty water. Considering the high content of salt in pink lakes, this is a big possibility.

Ultimately, taking photos of the opaque pink lakes is the best way to enjoy them.