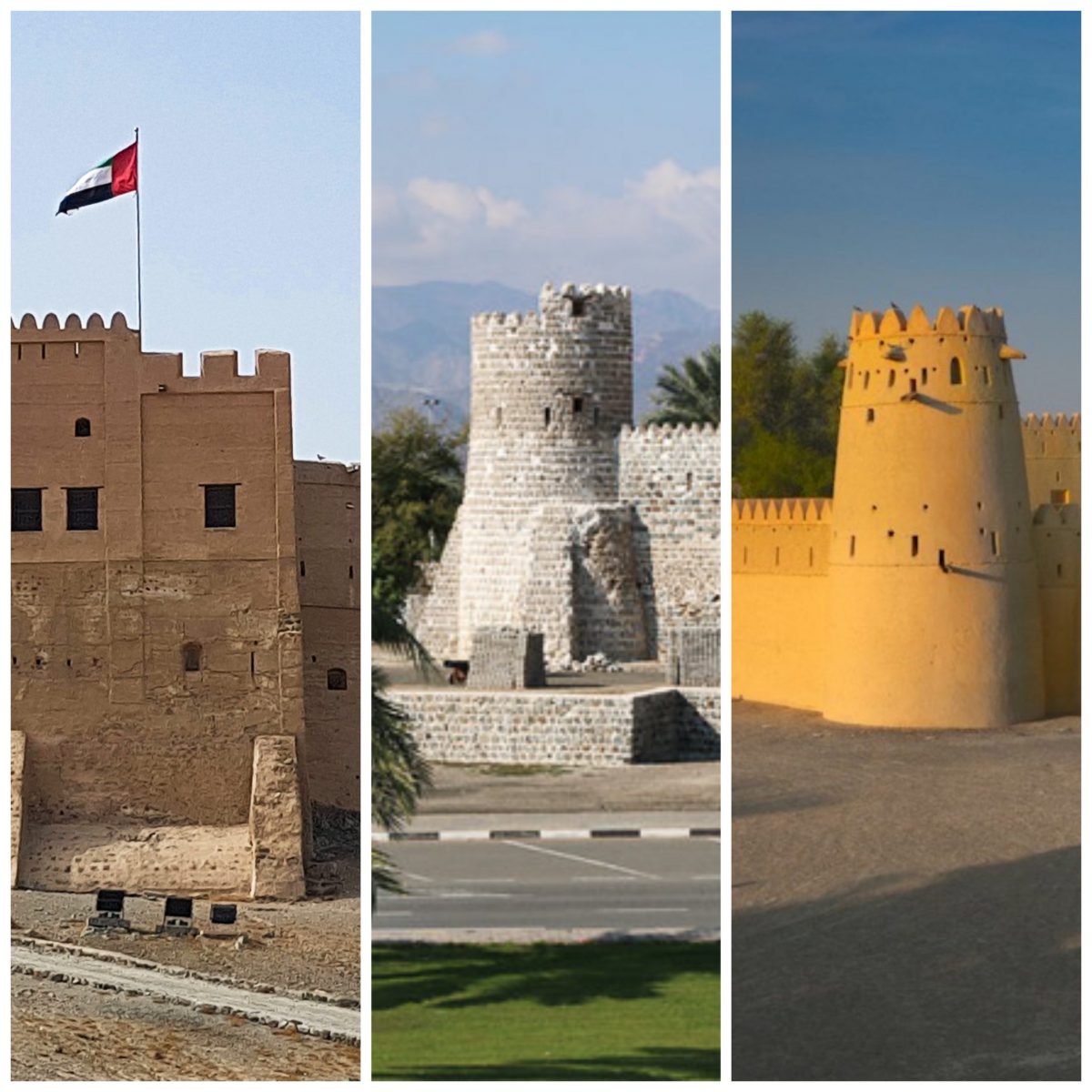 ne look at the forts and you will know the richness of the great architectural techniques used in the construction of these forts. Let’s look at the best forts you can visit in the UAE in your next trip.

UAE is home to several exceptional and magnificent forts that represent the rich heritage of Emirates’ culture. One look at the forts and you will know the richness of the great architectural techniques used in the construction of these forts. Let’s look at the best forts you can visit in the UAE in your next trip.

One of the largest forts in UAE, Al Jahili Fort was built by Sheikh Zayed bin Khalifa the First between 1891 and 1898 as a symbol of power and as a royal summer residence. n addition to using the Castle for military purposes, it occupied an ideal location for military operations, as it is located close to water sources and surrounded by fertile agriculture land.

The original components of Al Jahili Fort include a square high-walled fort and a separate round tower composed of four consecutively rising and narrowing concentric tiers. In 2007-2008, the fort underwent a major rehabilitation project. Today, the fort has cylindrical towers at three of its corners, while in the fourth is the sheikh’s majlis, or reception area, where he entertained guests and conducted official business.

Al Fahidi Fort was built in 1787 and served as the headquarters for the ruler of the emirate. It was restored during the reign of the late Sheikh Rashid bin Saeed Al Maktoum. In 1971, the year when the UAE was founded, Al Fahidi Fort was officially inaugurated as the Dubai Museum and began showcasing the history and heritage of the emirate of Dubai.

The development of the Fort continued, and in 1995, the second section of the museum located under the fort was opened, which contains exhibits and collections from the period before the discovery of oil as well as antiquities that were found in Dubai’s archaeological sites.

Built by the Portuguese in 1624, the Dibba Al Hisn Fort is the most popular tourist attraction in the town. The fort is an interesting sightseeing destination to learn about the wars of the foregone days. Besides the fort, Dibba Al Hisn is famed for its agricultural and fish souks, which are ever buzzing in activity. The town looks over to a picturesque marina, decorated with boats and yachts.

This 19th-century Masfout Castle was once the first line of defence against bandits heading to neighbouring Oman. Built with stones, mud, and local timber, Masfout Castle consists of two rooms and a gate. The tower-shaped castle was restored in the late 1940s at the behest of the late Sheikh Rashid bin Humaid Al Nuaimi. The castle is located on the northern edge of Masfout, 120km southeast of Ajman.

Falaj Al Mualla Castle was built in 1800 approximately in Umm al Quwain and it consists of a squared building with two towers on the northeastern and southwestern sides, a large majlis with lobbies overlooking an internal courtyard in addition to many watchtowers. The town is an oasis town and its name translate as “water channel (falaj) of (Al) Mualla”

Dhayah Fort is a historic site in Ras Al Khaimah located amid mountains and palm gardens. This 18th-century fort is popular for being the last outpost of resistance against the British army in 1819. Apart from its historic and military significance, the fort is also famed for offering stunning 360-degree views of its scenic surroundings.

In the list of Best Forts to visit in the UAE, the next one is Fujairah Fort. Built in 1670, Fujairah Fort is the oldest fort in the United Arab Emirates. It has served as both a defensive building and a home for the ruling family. And for many centuries, it was the only stone building along the Fujairah coast. The fort has three major sections, several halls, one square tower, and two round towers. In recent years, it has been fully restored to its former glory.

ALSO READ: Best hotels and resorts for your stay in Ras Al Khaimah