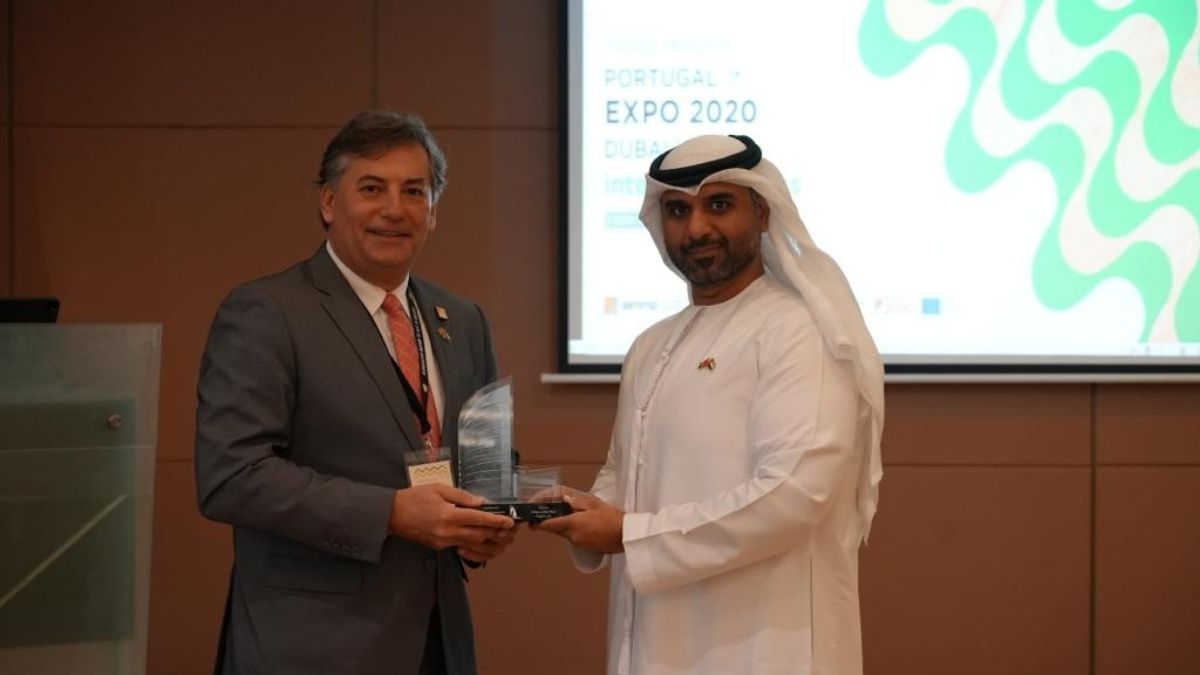 The Ras Al Khaimah Chamber of Commerce and Industry and a Portuguese delegation discussed ways to promote economic cooperation in many commercial, industrial and tourism fields.

The Ras Al Khaimah Chamber of Commerce and Industry and a Portuguese delegation discussed ways to promote economic cooperation in many commercial, industrial and tourism fields. This is a part of the RAK Chamber’s efforts to strengthen its network of international relations and support the interests of RAK Chamber’s member companies and factories to enter new markets and build effective business partnerships.

This came during a meeting between the Acting Director-General of the RAK Chamber, Muhammad Hassan Al-Sabab, and a delegation of the Republic of Portugal led by Daniel Pontes, Commercial Counsellor at the Portuguese Embassy in the UAE, accompanied by Lourdes Isabello, Chairperson of the Portuguese Business Council, and Dr. Vitor Bocas, President of IMP, along with a large crowd of businessmen from the major Portuguese commercial, food and industrial companies, representing a number of commercial sectors in Portugal, in particular the furniture sector.

Muhammad Hassan Al-Sabab stressed that the RAK Chamber is following well-thought-out plans aiming to enhance commercial and economic cooperation between the Emirate of Ras Al Khaimah and all countries of the world, including the Republic of Portugal. According to Al-Sabab, this is why the Emirate is always keen to continuously explore the investment opportunities available with various parties, which open promising prospects for the investors of the Emirate of Ras Al Khaimah and RAK Chamber’s member companies and factories. Al-Sabab highlighted the importance of the new and integrated path of residences that the UAE recently announced within the “Projects of the 50”, as it promotes stability of Arab and foreign investors in the UAE, making it an attractive destination for businessmen being the “Land of Opportunities” and the best place to live and reside in the world.

“The meetings with the trade delegations provide an opportunity for us to promote the economic components and incentives that the Emirate of Ras Al Khaimah owns, and the facilities provided by the RAK Chamber to the trade and investment sectors, through which our government seeks to enhance the Emirate’s competitiveness and build an economic environment that attracts investors and can contribute effectively to achieving the economic objectives of the RAK Strategy and support its journey towards sustainable development,” Al-Sabab added.

The meeting discussed ways to enhance joint relations and cooperation between the two sides, the importance of participating in exhibitions organized by the two sides and the continuous exchange of visits by delegations and holding joint meetings, in addition to inviting the Portuguese side to participate in specialized exhibitions organized by the Saud bin Saqr Foundation for Youth Project Development, which enjoy wide participation from various countries.

For his part, the Commercial Counsellor at the Portuguese Embassy, ​​Daniel Pontes, expressed his appreciation for the development process witnessed in the Emirate of Ras Al Khaimah, which covers all aspects and sectors, as seen and felt by him during his stay in the UAE. According to Pontes, UAE is one of the most important partners of Portugal in the Arab region, pointing out that “The promotion of bilateral relations between Portugal and the Emirate of Ras Al Khaimah to a strategic partnership is a logical matter that will bring benefits to both sides.” Further, Pontes emphasized the positive effects, which he expected to be in the interest of both parties after signing a cooperation agreement with the RAK Chamber. “With the promotion of bilateral relations to the level of strategic partnership, we will have the opportunity to make these relations closer and stronger, in particular in the economic and commercial fields,” Pontes added.

The Portuguese businessmen explored the mechanisms of providing the opportunity for the RAK Chamber’s members to build partnerships and conclude deals with them, under the umbrella of the RAK Chamber and the Portuguese Business Council in the country, in addition to discussing the importance of this trade exchange for both sides.