This is now illegal in Ras Al Khaimah!

Home » Lifestyle » This is now illegal in Ras Al Khaimah!

Your Kindness could Kill – ‘Fight begging, Help the eligible’ this Ramadan in Ras Al Khaimah

You are walking through the town or city centre where you live when you see a figure huddled under a blanket in a doorway, eyes downcast, an empty disposable coffee cup at their feet containing a smattering of small change. What do you do? Avert your gaze and briskly pick up the pace? Or maybe fumble in your purse or pocket for a pound coin to drop into the cup? The government says you should keep your cash where it is.

To combat the menace of begging during the holy month of Ramadan, the Ras Al Khaimah Police launched an ‘anti-begging’ campaign themed ‘Fight begging, Help the eligible’, which is in line with the Ministry of Interiors’  strategy to ensure the security, safety and stability of the country.

Begging is a negative phenomenon mostly during Ramadan, where the beggars take advantage of people’s generosity. The police will step up efforts to fight this issue with intensified checks in public areas.

The Ras Al Khaimah Police, in cooperation with the government and local authorities, will launch security and civilian patrols to combat this phenomenon, particularly in areas where beggars are concentrated, such as markets, residential areas, Ramadan tents, places of worship and car parks. 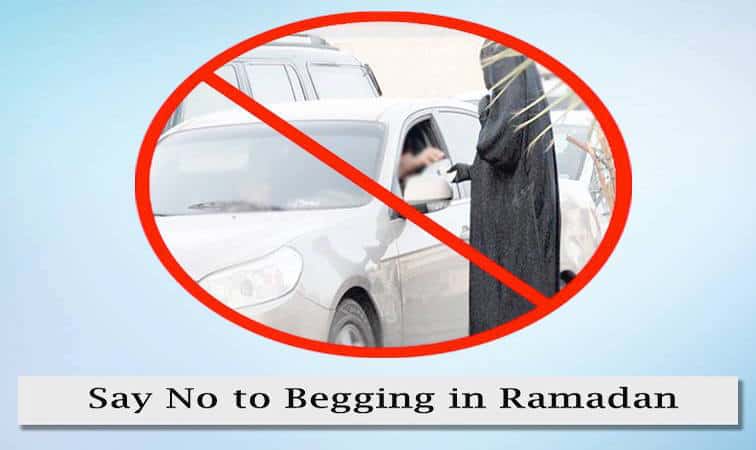 How can we help?

Begging hampers the safety and productivity of the society and spreads laziness, unemployment, and fraud. Up to 35,000 brochures shall be distributed across the emirate to spread awareness and enlighten the public about the negative impact of this phenomenon starting from the RAK police social media channels. The campaign aims to curb begging and guide residents about the social responsibility of members of society. It also will raise awareness on the dangers of responding to beggars.

Begging is a crime as per Law No. 10, and a jail term of not more than three months and a fine of not more than Dh3,000 shall be slapped against any beggar as per Article 4 of the Law No. 10. Should the beggar be a foreigner, he or she shall be liable to deportation as per the court jurisdiction, Should anyone instigate a minor to go begging they will suffer a six-month imprisonment at least, as per Article No. 7 of the same law.