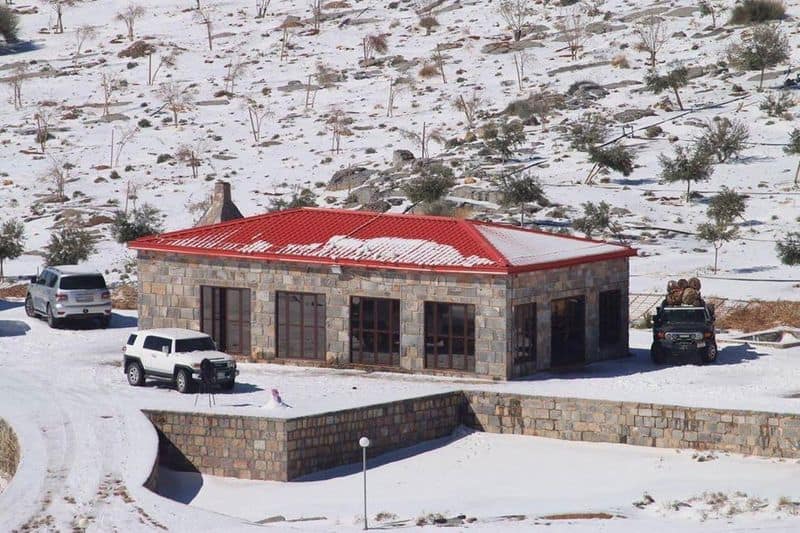 As temperatures dropped to -1°C on Jebel Jais, in the early hours today the highest peak of UAE and the star attraction of Ras Al Khaimah’s mountains was almost covered with fresh white snow and hail.

This is mainly due to the extension of a surface low pressure east and northwards with an extension of surface high pressure westwards accompanied with an upper air ridge, the National Centre for Meteorology (NCM), said.

The weather on Thursday is expected to be fair to partly cloudy in general, they added. UAE residents are currently enjoying the much awaited winters.

Moderate to fresh South-easterly to South-westerly winds are expected, to become Northwesterly with a speed of 20 – 30 km/hr reaching 40 km/hr.

The sea will be moderate in the Arabian Gulf through the day and the rough Oman Sea will become moderate by the evening.

As heavy snow and hail lashed the emirate, many residents took to the open areas to record the white blanket of snow decorating the Hajar mountain ranges. Ahmed Al Shehi, an Emirati national, said it kept raining and snowing all night. “We have made many icemen and dressed them in traditional clothes.”

The RAK Police have issued warnings in Arabic, English and Urdu to the public on the weather conditions on their social media accounts. The public is urged to call (999) in case of emergency and (901) in regular cases.

Some beautiful images of the star attraction are doing the rounds on Social Media, we have collated a few of them for your viewing pleasure.

Seems like Christmas has just begun this season, WOW-RAK!