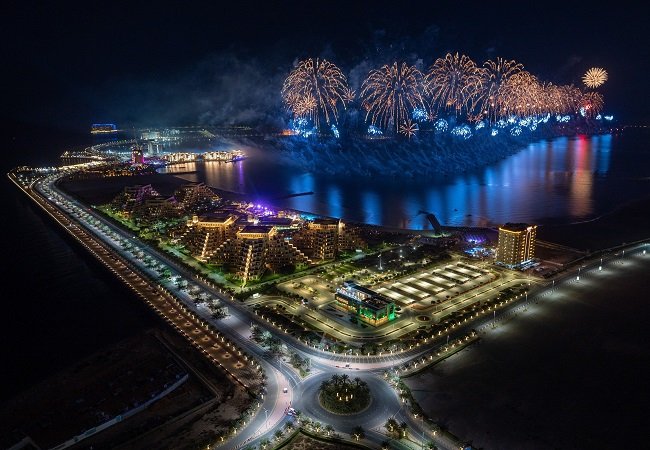 The 10-minute show was made all the more captivating with musical themes. With the countdown setting in, a great thunder and breathtaking display of colours followed to usher in the New Year.

The Ras Al Khaimah New Year’s Eve Celebrations dazzled the world with a 10-minute fireworks show that underlined the UAE’s message of hope, peace and achievements, as the world welcomed 2021 with optimism and renewed confidence.

Lighting up the sky over the Arabian Sea, the fireworks spectacle was organised by following all safety protocols. While guests, including UAE residents and tourists, at hotels in Al Marjan Island and Al Hamra Village watched the show on-ground, the event was also broadcast live on television channels globally and via social media channels, reaching millions of viewers around the world. People can catch up on the exciting show on raknye.com.

Abdulla Al Abdouli, member of the event Organising Committee, said: “The Ras Al Khaimah New Year’s Eve Celebration is indeed a tribute to the resilience and strength of humanity. We are sending a message of positivity to the world from here in Ras Al Khaimah, urging people to move forward with confidence after what was an unprecedented year. As we move into 2021 with Ras Al Khaimah chosen as the GCC Capital of Tourism, we aim to inspire people to visit the emirate and explore its wonders in full confidence.”

The Ras Al Khaimah New Year’s Eve fireworks show was indeed like no other with its location in the picturesque setting of the Arabian Sea, framed against the landmarks of Ras Al Khaimah’s natural landscape, the architectural edifices of Al Marjan Island and Al Hamra Village.

With 8,500 kg of fireworks used, the display spanned a length of 4 km and width of 3.9 km, creating oneof the brightest spots on earth. The festive panorama of colours was achieved from 81 launch pontoons that shot up 15,281 firework shells. The show took 20 days of offshore and onshore preparation with 30 technicians. More than 3 km of optical fibre was laid in addition to 6 km of control cables.

The 10-minute show was made all the more captivating with musical themes. With the countdown setting in, a great thunder and breathtaking display of colours followed to usher in the New Year.