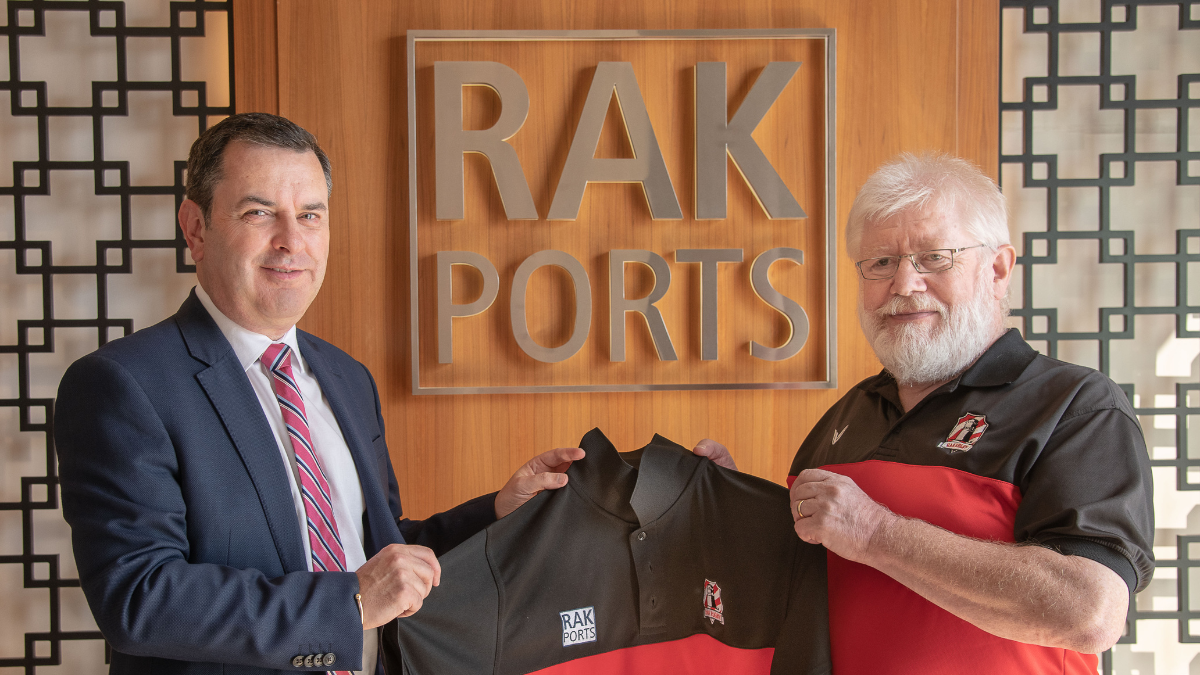 RAK Ports is announced as headline sponsor of RAK Rugby, which is using the funding to develop its youth training programme to improve young people’s fitness and educate them on sporting integrity!

RAK PORTS has always been proactive in enriching the local community through sponsorships and extends its aid by supporting the sporting and local events within the community. RAK PORTS has traditionally supported RAK Rugby, for many years as active playing participants as well as sponsors.

“RAK PORTS is pleased to once again support RAK Rugby with our sponsorship commitment for the 2022/23 season. It is important for us as a key Ras Al Khaimah state-owned enterprise, particularly following the difficult period for participative events over recent years due to the outbreak of Covid-19, that we align with the vision of His Highness Sheikh Saud bin Saqr Al Qasimi, UAE Supreme Council Member and Ruler of Ras Al Khaimah, to support our communities’ endeavours to continue the Emirate’s development across all business and cultural sectors, including sporting initiatives.

In addition to the ongoing development of RAK Rugby’s senior teams, it is encouraging to see the significantly enhanced activities and inclusive community programs being rolled out this year with a focus on junior rugby, and we are pleased to offer our continued sponsorship and support to such activities. We wish Chairman David Learman, his committee colleagues, all the teams and everyone at RAK Rugby every success for the coming season.”

David Learman, Chairman, RAK Rugby, said: “RAK PORTS has been unwavering in its support of RAK Rugby for several years and has helped sustain the club during the toughest of times, for which we are truly appreciative. I am delighted that RAK PORTS has agreed to be our headline sponsor for the coming season. Their support will help us towards delivering a number of objectives set by our patron, His Highness Sheikh Saud bin Saqr Al Qasimi.

These involve reaching out and engaging with young people, and the RAK community as a whole, encouraging participation in fitness and sports education and activities and instilling the values of camaraderie and fair sportsmanship at all levels.”

With the support of RAK PORTS, RAK Rugby will develop its Raptors Mini & Youth training programme. The programme is aimed at encouraging participation of Emirati and expat children between the ages of four and ten years old in activities designed to instil the values and codes associated with rugby. The club’s emerging Touch Rugby programme will also benefit from the goodwill of RAK Ports in the community. The club aims to increase participation exponentially and, by the end of the season, compete in Touch Rugby tournaments held around the emirates.

With the input of RAK Rugby’s new elite coaching team, its senior players, and with the ongoing support of RAK PORTS, the club will drive its extra-curricular schools programme forward in partnership with various educational institutions in the Emirate.Rugby has been played in Ras Al Khaimah in various forms since 1969. The club was formally inaugurated in 1981 under the name RAK Goats – named after the indigenous goats found across the local Hajar mountains.

The team played under this name and led a nomadic existence until 2018, when the club was officially formalized by Emiri decree and named ‘RAK Rugby’. For further enquiries about RAK Rugby, contact Hannah Joao, Communications Officer, RAK Rugby on +971 50 675 6762.