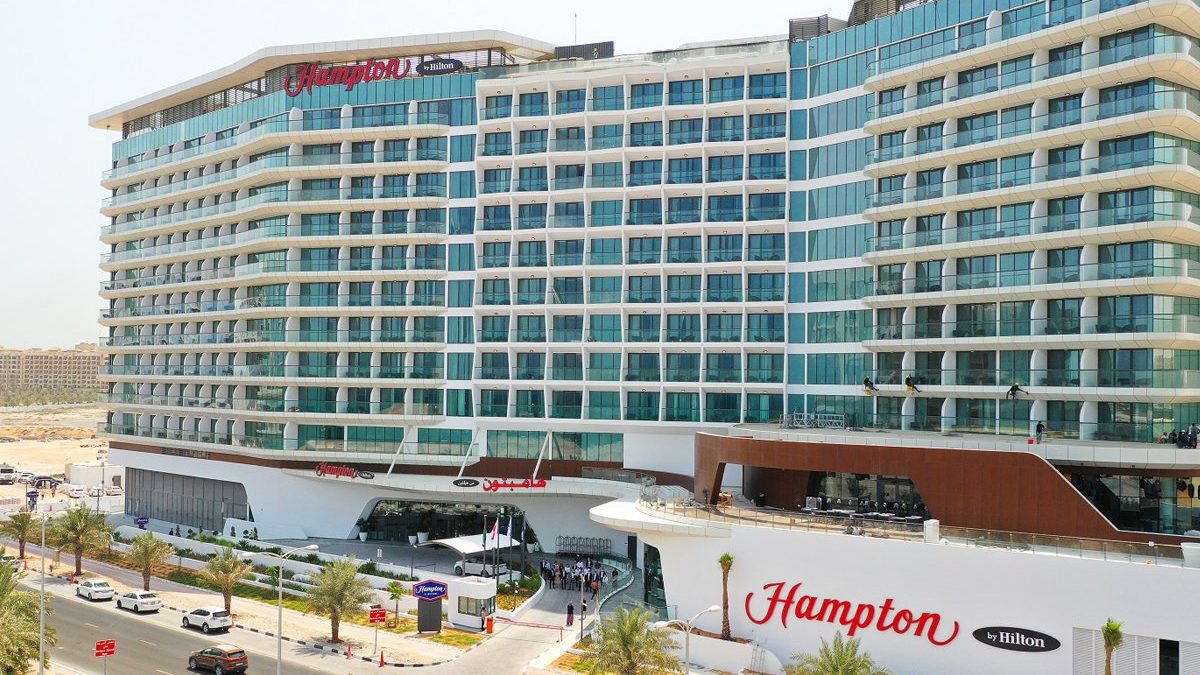 In June 2021, Hampton by Hilton RAK installed a Power Knot LFC-300 biodigester to help them achieve zero waste sustainability goals. Since its installation, the machines have successfully digested over 58,000 kg (130,000 lb) of food waste.

Hampton by Hilton, popularly known as Hampton Inn, is an American hotel brand owned by Hilton Worldwide. They are commonly designated as budget to midscale service hotels. Most Hampton by Hilton are independently owned franchises and operated by franchise owners. As of December 31, 2019, the Hampton franchise includes 2,544 hotels in 30 countries.

Hampton by Hilton Marjan Island RAK is a 4-star hotel located on the Marjan Islands. It is the largest all-inclusive Hampton by Hilton in the world and is located in the upscale area near Al Hamra. The resort features 515 rooms, 750 meters of a private beach, seven restaurants and bars, and offers 24/7 room service.

As part of a global initiative, Hilton Worldwide has committed to cutting its environmental footprint in half by 2030. Hilton has deployed a comprehensive program to reduce food waste in their hotels in the Americas and began piloting programs for food waste in the Asia Pacific and EMEA regions. Hampton by Hilton RAK is held at a higher standard than other Hilton hotels and is expected to lead the EMEA region in sustainability efforts as one of the latest hotel additions. In June 2021, Hampton by Hilton RAK installed a Power Knot LFC-300 biodigester to help them achieve zero waste sustainability goals. Since its installation, the machines have successfully digested over 58,000 kg (130,000 lb) of food waste.

In 2018, the Hilton Group became the first major hotel company to set science-based greenhouse gas targets, approved by the Science Based Targets initiative. In their 2020 ESG Report, Hilton announced their public commitment to reducing waste and driving toward a circular economy. They pledged to reduce their waste, including food waste, by 50% by 2030. Their waste reduction strategy aimed to decrease the overall amount of waste produced in hotels while diverting the remaining waste from landfills through donation, recycling, composting, energy from waste incineration and other opportunities.

The Hilton group noted that “Waste is more closely linked to occupancy than energy or water.” On average, each person on-premise at a hotel produces a kilogram of waste per day.

Hilton’s food waste pilot program leverages the Hotel Kitchen toolkit and guides hotels through techniques for reducing food waste in every step of the food & beverage process from purchasing and menu planning to the donation of excess edible items and disposal of remaining inedible food. Disposal of inedible food waste required a scalable solution that could be implemented in a multitude of regions that ranged from oceanside resorts to highly impacted cities.

Hilton also sought to improve their measurement capabilities around food waste to properly develop a standardized waste measurement methodology for the hotel industry. Once finalized, this methodology would enable Hilton hotels around the world to better quantify food waste in measurable and reduction targets.

The sustainability team at the Hampton by Hilton Marjan Island RAK was particularly excited about the LFC Cloud, Power Knot’s continuous data analytics on food waste digested by the LFC biodigester.

With the LFC Cloud, the corporate team could gain visibility into their waste stream to identify key areas of waste production, increase their measurement capabilities around food waste, and set realistic targets for the reduction of waste. This kind of data-informed decision making would help them achieve environmental directives.

Additionally, the LFC Cloud offered lifetime access to services and the ability to aggregate data from multiple machines into a single report. The installation of a single biodigester would enable Hampton by Hilton to set a corporate environmental benchmark.